Another good year for the great game of rugby is in full swing. And SCRUM got off to a flyer with a very successful first lunch in April. How about Laurens van Der Gaag of Pacific MMI winning the bid on the Rolling Stones guitar for his bar room wall? That will be a talking point for many years to come. Well done Laurens and thanks for your fantastic support mate!

In pure rugby terms so far this year, the Waikato franchise finally showed the consistency they’d previously lacked and were too good for all comers in the SANZAR Super 15 Rugby competition. After mid-June internationals between northern and southern hemisphere opponents, it showed once more that the southern hemisphere teams maintain their dominance over their northern counterparts.

And now the Rugby Championships between the four southern hemisphere rugby powers of South Africa, New Zealand, Australia and Argentina is on with the All Blacks showing they are a class above. If the game is to grow then such competitions must be expanded.

Here at home, the PNGRFU have been very busy with the National Sevens Championships held in early June at Lae. The best prepared PukPuk sevens team travelled to Sydney for the Oceania Cup last weekend. They placed 5th and gained some much needed experience against stronger Pacific opponents. This exposure to international competition assists the game’s development here in PNG. Importantly, the team’s tournament points differential was reduced significantly, confirming that the improvement in skill and execution is happening.

And SCRUM’s consistent work is underpinning the ongoing development of the code across PNG in other ways. In July for example, SCRUM had a visit from Total Rugby Concepts, a specialized skills coaching service from the Sunshine Coast in Queensland, which took a squad of our young 16 and 17 year old rugby players through a week long skills camp.

This camp was incorporated into Robin Tarere’s final preparations with the National Under 17 squad that will again compete at the Queensland State Junior Rugby Titles in Toowoomba in September.

This initiative and other aspects of the development programs that Robin has been able to achieve through the Coca Cola Schools Rugby Program has delivered a positive outcome with two young men who have grown up in the program gaining a five week scholarship to Sunshine Coast Grammar. By the time of the lunch I will have news on the Under 17 squad’s campaign in Toowoomba.

Here in Lae SCRUM and the Morobe Rugby Football Union will also host the National 15 a side Rugby Championship later in the year.

The SCRUM committee is putting further focus into the development of the SCRUM Oval. For those members and supporters who have advertising deals at the oval or who would otherwise like to assist, please liaise direct with us to keep abreast of plans.

SCRUM is also developing a website to keep members and other stakeholders updated on its work. Members will be advised of launch date at the lunch.

The year 2013 is earmarked as SCRUM’s 20th anniversary. I will speak at the lunch about how we intend to celebrate our 20th year together as an association and invite you to peruse the top quality 20th anniversary merchandise that is available for sale in the lead up to the lunch. An order form is also attached with this letter for your convenience. 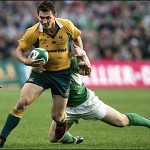 Which leads me to answer the question I’ve been copping lots of in the past few weeks: When’s the SCRUM Lunch Framey?!!? Gentlemen, please accept my invitation to our last lunch for the year to be held on Friday the 5th October, 2012 at the Lae International Hotel Haus Win.

Matthew S. “Mat” Rogers was born in Caringbah, New South Wales and is a former Australian professional rugby league footballer of the 1990s and 2000s, retiring in 2010 from the Gold Coast Titans NRL franchise.

The son of the late Cronulla-Sutherland Sharks and Australian rugby league legend Steve Rogers, Mat played for the Sharks as well. He also played State of Origin five times for the Queensland Maroons and for the Australian national side the Kangaroos in seven Tests between 1998 and 2000. 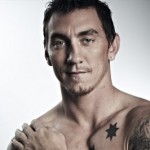 Switching to rugby union in 2001 he became a dual-code international in 2002. Mat was part of the 2003 Wallabies world cup squad that finished runners up to Clive Woodward’s England. Such was his skill and versatility Mat was selected in various positions in the Wallabies and Waratahs backline, often making an impact with his running and kicking game.

He returned to the NRL in 2007 with the newly formed Gold Coast Titans club. With the Titans beset by injuries and poor form, Rogers announced his comeback to help out the club on-field in 2011, but a serious injury forced him to announce his retirement again just minutes into his first game back.

Outside of his sporting prowess Mat Rogers has been committed to raising awareness about the debilitating disease that is depression, which affects one in six men, since the death of his father Steve in January 2006. He has signed on to be an ambassador for Movember, an initiative that encourages men to grow a moustache during November to raise funds for research into depression and prostate cancer. 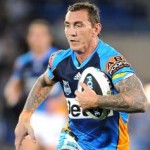 He has made a pact with brother Don always to be honest about their feelings. As tough as Mat is, when talking at corporate lunches he encourages men to talk to family, doctors or mates if they are experiencing the symptoms of depression.

I’m sure you will be inspired and motivated by our guest speaker.

Dr. Tynan says he has the perfect cure for anyone feeling a bit depressed and that’s good belly laugh!!

Please let me introduce our entertainer for the lunch: the amazing Brendan Mon Tanner!!

Brendan Mon Tanner is an Award winning professional entertainer magician of the highest order, an international act for over 20 years and has appeared in almost every major venue across Australia and around the globe, specializing in hilarious stand-up comedy magic to grand Illusion and spectacular production shows. Brendan has amazed audiences in Hawaii, Guam, Singapore, New Zealand,
Indonesia, Greek Islands, Japan, South Korea, Vietnam, Canada, the USA and now he’s coming to Papua New Guinea.!!

Brendan is a consummate professional and performs over 120 public shows and 150 Corporate Shows a year.

Brendan calls his act “Fast & Dangerous”…….he obviously hasn’t been in a vehicle with Tyno yet!!!

It will be fast. It will be dangerous. And it will be hilarious!! So don’t miss it.

Don’t forget that we will have our usual fundraising auction afterwards and I ask you to give it your strong support once again gents. Mike Quinn will be on hand to test who has the short arms and the long pockets and SCRUM will have some very special items available; including an exclusive fully signed and framed All Blacks Jersey from the 2011 Rugby World Cup.

The character, self esteem and sense of team work that young people develop by playing the game of rugby and participating within the discipline of the various SCRUM programs are beginning to shine through with the stories I’ve mentioned above. Let’s continue the good work together.

Gentlemen, as always there’s great interest in the event but as usual Corporate and Individual members will be given preference for table bookings. Please contact me directly on 4757387; our Secretary Anthony on 4721735 or the emails listed above to advance book your table now.

[xss_infobox]Reminder – tables must be paid in advance or tickets WILL NOT be issued.[/xss_infobox]